I’ll start off this post with a fun fact: did you know that Paris was nicknamed the “City of Lights” because of all the intellectuals that lived in the city, rather than literal lights that dotted the city streets?

My third day in Paris started off with a morning cappuccino, an almond/chocolate croissant and a train ride to the beautiful Versailles. I arrived at opening, and had to wait about an hour in line for security. Again, since my UK Visa permitted free entry as I qualified as an EU resident, and I was a little disappointed at the inside of the palace compared to the outside. The apartments themselves were stunning, but after having been in castles such as Neuschwanstein in Germany this was a little bit of a letdown. To be honest, the most interesting part of the trip was the outside of the Palace, which I enjoyed for free, and eavesdropping the conversation of the Americans that stood behind me in the security lineup. I chose not to visit the gardens because the lines were too long but they seemed beautiful from what I could see. 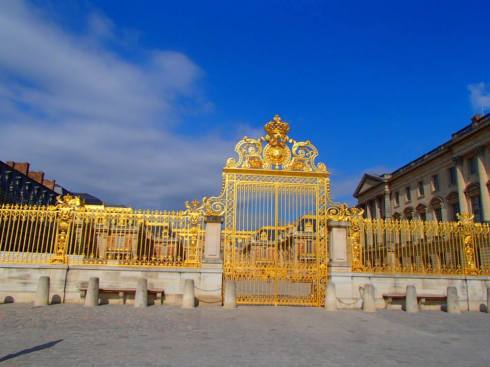 I trained back to the city and tried to wait in line for the catacombs but it was too long, they said it would close before I had a chance to visit. I instead walked to Luxembourg gardens an explored the Saint Michel area which was filled with cafes, food stands and gift shops; I got a delicious Nutella crepe for the best price I have seen (€2.30). I then walked to Ave Champs Elysées and wandered around for a while before returning to my hostel.That street has so many stores and is gigantic in itself, holy smokes! If you find yourself in that area, make sure you check out the Abercrombie and Fitch, it’s surely a sight for the eyes.

That night, at dark, I took the metro to the Trocadero station  and saw a magnificent light show display of the Eiffel Tower. I was a bit nervous to metro so late in the night so I attempted to look like a natural Parisian, I guess it worked because 2 people asked me for instructions! It didn’t faze the creepy guys at the metro station though; you really need a strong “no” to make them go away. My understanding of the French language wasn’t good enough to figure what one particular man was yelling at me at the Subway station, so I just ignored him and power walked away.

The plaza at Trocadero is simply fabulous. It offers one of the most beautiful views of the Eiffel tower, and the light shows at night time are magical. When I was there, on a random April night, I saw a bride with her wedding party!
I returned to my hostel for some wine, Brie, baguette and veggies and couldn’t be happier. I got 350ml of decent
Cabernet Savignon for €1.50. This city is magical in every sense of the word. 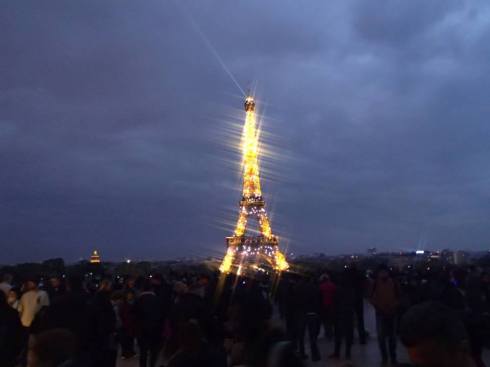