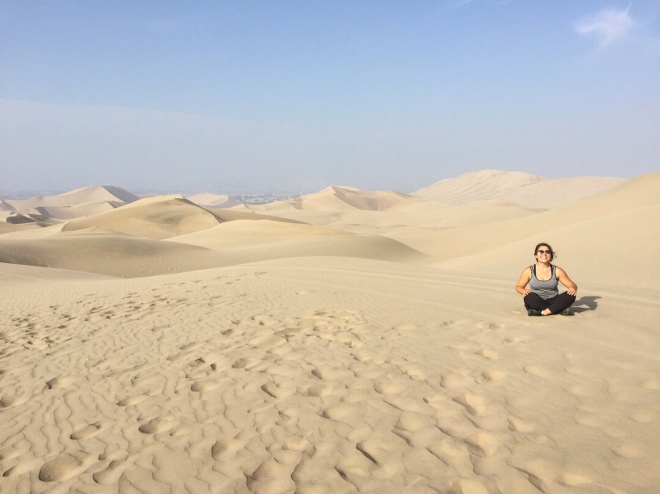 The day after our crazy night out in Lima, we hopped on the bus to Paracas. We had read it’s a cute beach town with some interesting sights, so we decided to check it out. Our bus ride was absolutely amazing – we went with a “bougie” bus line that included a meal, blanket, pillow and entertainment system… for a 4 hour ride! Nowhere near to our bus ride from hell which I will discuss in the next blog post.

We got to Paracas later in the day and walked around the little town and organized our lives a little bit. The fun thing that we are doing this trip is organizing our lives 3 days in advance instead of months in advance. However it does take a little bit more of our down time to coordinate! We went for a dinner that night at this cute little art studio that also happened to be a restaurant. We both got a fried rice dish which was amazing as it was salty. The owner was really kind and we adored him. 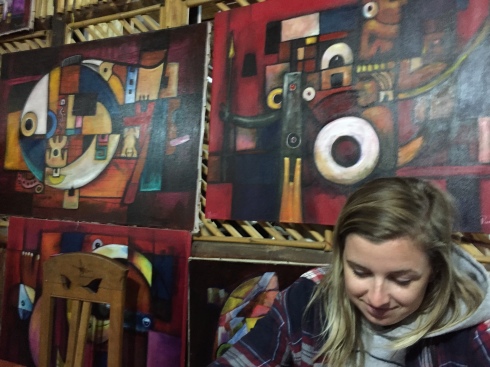 We had a chill night that night due to our overextension the night before. We showed up at the hotel bar waiting for a foosball tournament that never happened so we had our own ping pong tournament instead!

The next morning we ventured on a boat tour of Ballestas Island. The dock area was so disorganized I didn’t understand how anything could get done. It reminded me of the ferry service in Thailand – crazily late and super disorganized, but somehow everyone figured out how to get where they were supposed to go. We passed the famous Paracas Chandelier on the boat ride over – a Chandelier etched into the sand of the side of a hill on a protruding part of the main land.

The Ballestas Islands are known for their biodiversity and we absolutely stunning. It had thousands of different kind of birds on it including the Peruvian Booby, penguins, and seals! I said to Kristy when we were on the boat that it felt like an episode of Planet Earth. It was awesome! 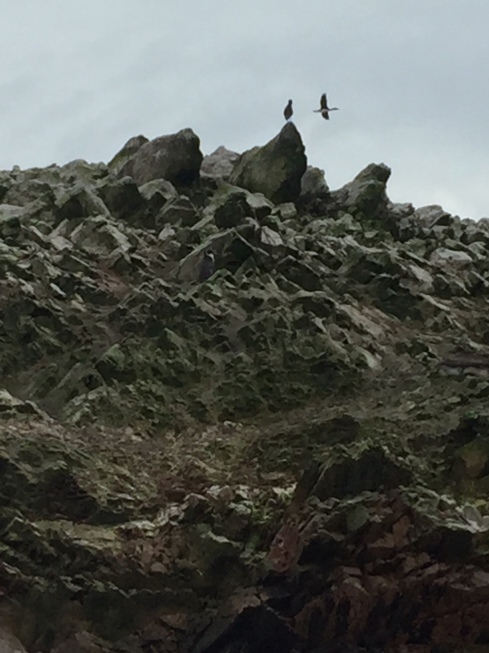 Our tour finished and we boarded a bus with our belongings, this time in the direction of Huacachina. The ride was only about an hour and we were greeted with amazing views of a desert Oasis! Huacachina is a little town surrounded by giant sand dunes with a small lake in the centre of it. Our dune buggy ride was later in the afternoon so we walked up the dunes and hung out by the oasis for a while.

We hopped on our dune buggy with 8 other random tourists and went for the ride of our lives! I have been dune buggying before but it was never this crazy. The seat belts were questionable and we definitely felt a little bit sore from the bumping around after! We stopped at this amazing viewpoint a way’s into the dunes for some amazing photos.

We drove around a bit more then gave sandboarding a try! I tried to ride it like an actual snowboard but it was super hard. Instead we took to riding it like everyone else – head first! The first dune we went down wasn’t very exciting, but the dunes following it were huge! I would say a few stories tall.

After our sandboarding adventure, we made our way back to Huacachina town and took a taxi into the city of Ica where we were scheduled to catch an overnight bus to Arequipa at 11:50pm. Stay tuned for my text blog post to hear how that bus ride went…..