Kristy and I were originally at a loss for what to do with approximately 7 hours as we waited for our night bus to Arequipa. It’s not the first late night bus ride I have ever been on where I had a long time to wait (see my blog posts leaving Ghent and Paris specifically) and I feel that there should be a database of stuff to do in each place where you might find yourself in this type of scenario. I’ve gone to see a movie before, hung out in a hostel, did homework in an airport McDonald’s and failed at trying to get a night’s sleep…. there are options, you just have to look for them!

This time Kristy had the idea of walking to a Starbucks 1km away to use their couches and wifi, so that is what we did. It happened to be attached to this giant mall, so I took a walk around and there was A LOT going on over there! To start, it was open until 11pm, I saw numerous ice cream vendors, a virtual reality station, and a woman and a child riding this cart that looked like a horse(?). After we shut down the Starbucks, we got a cab back to the bus station (which I organized and negotiated thanks to my steep Spanish language learning curve – my language level before getting to Mexico City was zero. It was a big accomplishment for me)! Oh, during this time I also got to try Inca cola- it was too sweet for me but kind of tasted like cream soda! 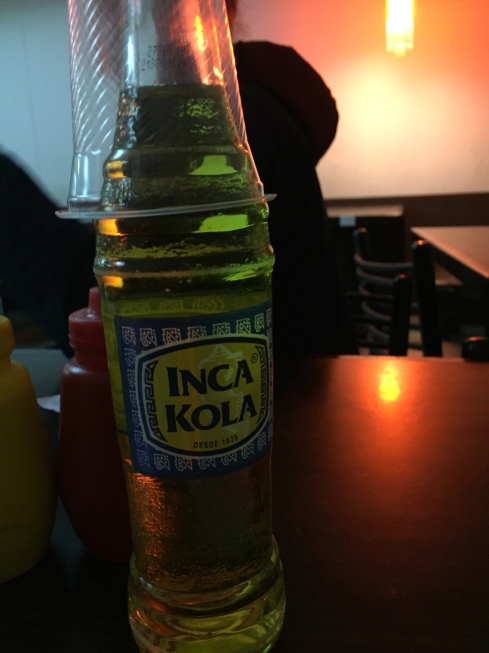 I have to backtrack a bit before I talk about or bus. I met up with my Peruvian friend, Rocio, before my trip and she recommended to me the do’s and don’ts of certain bus lines in Peru. However, Kristy and I had a hard time booking this particular bus so we waited until the day before. Unfortunately we had to book with a bus line they was not on her list, and while the price was good ($~30CAD for a 14 hour bus ride) the bus ride was not. It pulled in 90 minutes late at 1:20 am and when we got on the bus it was not the dream setup we had anticipated. It was regular seating, even a bit squishy by coach bus standards, and when we got to our seat near the back of the bus someone was already sitting in it. Rocio had told me that other bus lines are known to pick up random people at unauthorized stops so I assume this person was one of those people. He thankfully moved when we asked and then we tucked in for a sleep… kind of. It was freezing cold, a large banging noise was coming from the roof continuously when the bus drove over 60 km/hr and someone a few rows ahead of us was watching the Simpsons on full blast volume until about 3am. Somehow we made it though and arrived in Arequipa 14 hours later, at 3pm. In the words of some German friends we met in Lima whose Peru experiences include losing all of their credit cards and being trapped overnight on a minibus in the snow, “We survived so now it’s funny”!

Our bus ride drove Kristy to illness so I was left to my own devices to wander around Arequipa for the first evening. 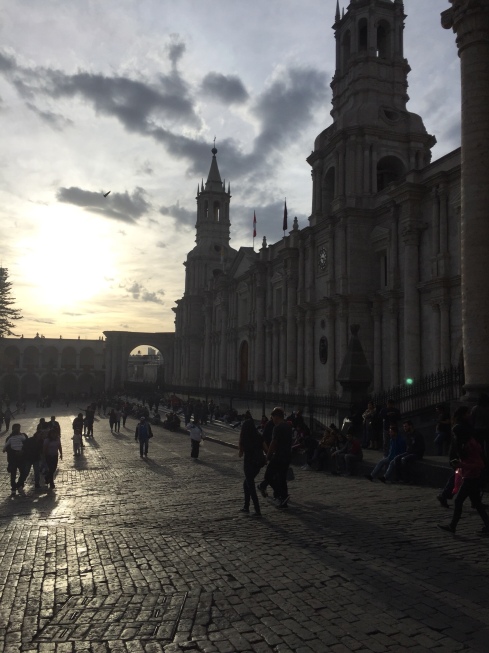 I ate at a delicious restaurant that offered a “menu del dia” where I was able to get an appetizer, entree and dessert for 7 soles (~$3 CAD). The language barrier was somewhat of a challenge but the server and I made it work. 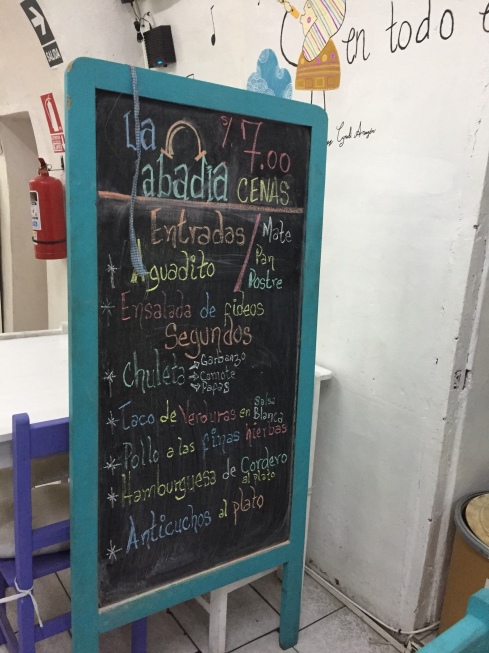 They had such adorable quotes on the walls! This one is my favourite: “the best things in life aren’t planned, they simply occur”

The next day Kristy was still sick so I went on a free walking tour of the city. One interesting thing I’ve noticed about Peru so far is that we have met very few Canadians! I was the only one on my walking tour. We walked some beautiful old streets, learned about Arequipa’s history, and caught a great glimpse of the mountains. 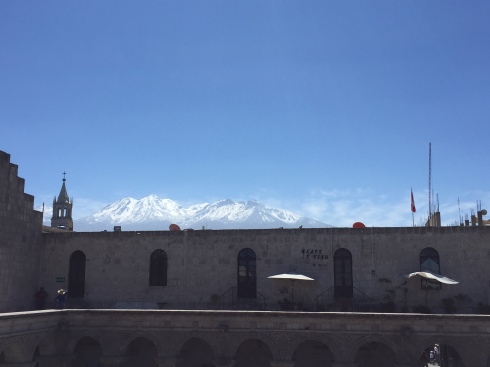 With Kristy still being sick, I decided to book a 2 day hiking trip for myself while she slept her illness away. I spent the rest of my afternoon booking and preparing for my adventure up Chachani Volcano on Monday, which you will hear about in my next post!!

One thought on “Malls, Bus Rides, and Arequipa”