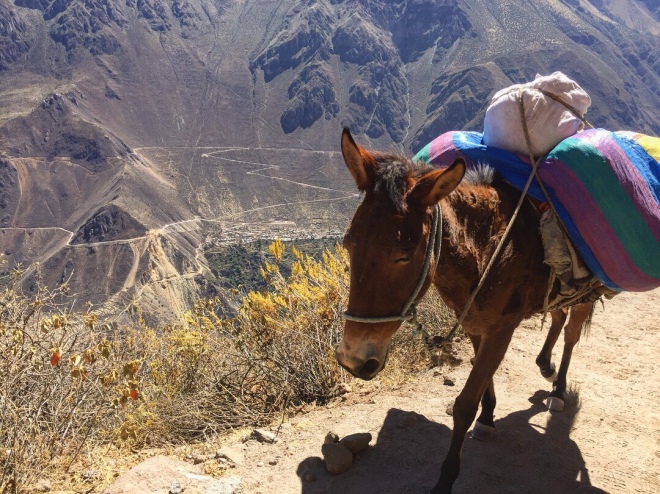 I apologize for the lateness on my post – it’s been a crazy week and a bit here in Peru. I’ve done more hiking in a short time span I’ve ever done in my life, have had very limited access to Internet, and have generally been SO BUSY! Today is my dedicated catch up day on the adventures I have been up to.

Right after I hiked Chachani Volcano (as in I got home from that trek and woke up at 3:30 am the next day) we left for our 3 day Colca Canyon excursion. Our bus picked us up and drove us for a few hours, where we were able to somewhat catch up on our sleep before a really early morning breakfast. After breakfast, we drove to a viewpoint where we were supposed to be able to view the flight of the condors. I think we got there a little bit too late, as we only saw 2 condors and there were hundreds of people at the viewpoint. It was still amazing to see though, as the animals were giant! 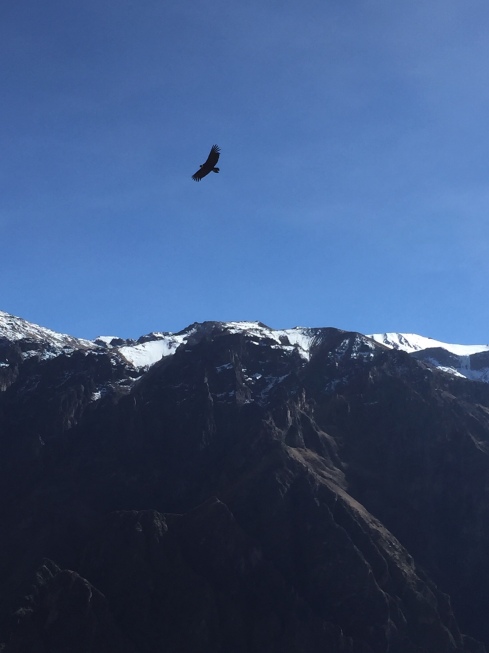 We assembled into our 3 day hike group (I would say most people do the two day option which I would not reccommend…. more about that later) which we absolutely loved and then began our descent down the canyon. It was crazily hot and we ascended about 1000m, the views were amazing the whole time! That day, we crossed a bridge over the river in the middle of the canyon and then stayed at a pretty nice homestay. Like I already mentioned, our group for this hike was amazing. It was quite funny because Kristy and I were the youngest people in our group by about 5 years but it did not matter! Age does not really matter when you are travelling. The first night we did a small hike into the local town to check out this mini museum that had a whole bunch of Incan artifacts. We had a solid sleep that night then went on our way the next day.

If you want to do the Colca Canyon trek, I 100% recommend doing the 3 day option. We only hiked for about 4 hours a day and actually got to enjoy what we were doing! We had an early start the second day – breakfast was at 6am, then we trekked a bit up and down within the Canyon to our next homestay which was called the Oasis. The views on day 2 were absolutely amazing – rivers, cacti, and reddish rocks – somewhat like the Grand Canyon, but a lot greener! 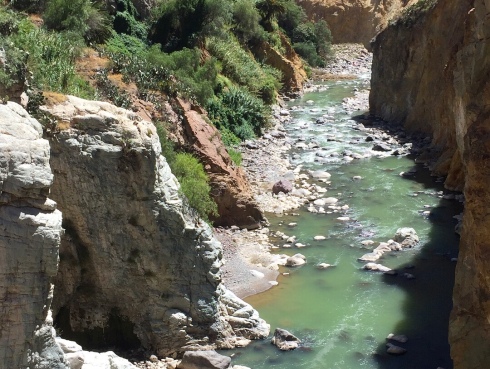 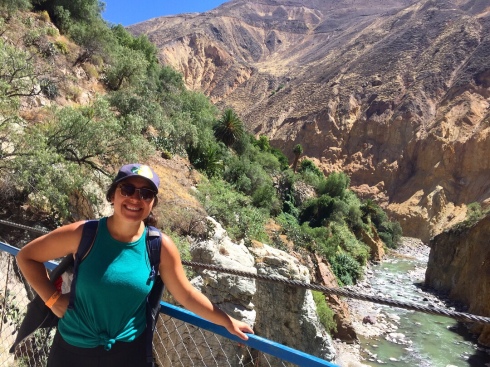 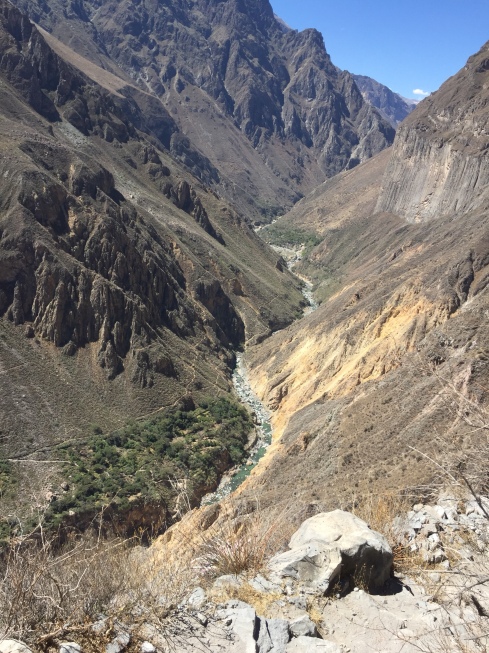 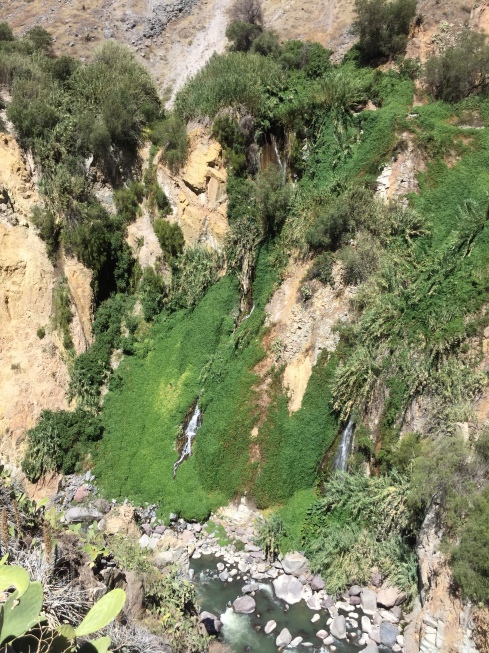 We arrived around noon and it was great because we had the whole afternoon to relax and enjoy the pool! We felt bad for the 2 day trekkers because they rolled in around 6pm and we had a 3:30 am wake up the next morning.

Night 2 was particularly amazing because it was so clear and the stars were just unbelievable. I went with some people from the trek a little farther from where we were staying and it was awesome because one pal had a “starfinder” app where it used gps to tell you what planet, star or constellation you were seeing! I wish that my phone was capable of photographing the stars in the Canyon because it was the most beautiful I have ever seen.

The next morning we woke up bright and early (3:30 am) and began our ascent up the canyon. Luckily for us it got bright quickly so vision wasn’t an issue! There were so many people on the trail and everyone was absolutely exhausted. It took Kristy and I about 2.5 hours to get up the mountain and it was a bit of a struggle – mostly because of the altitude so we were breathing heavily – but we made it. 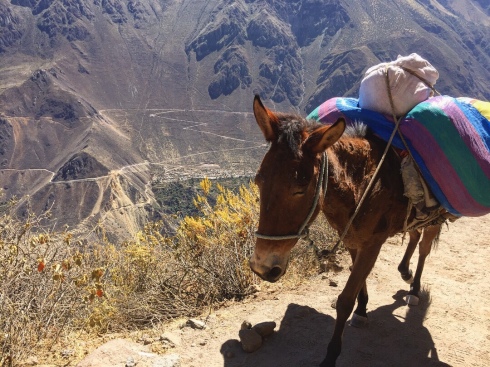 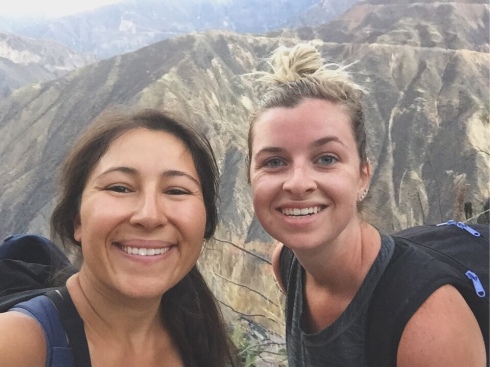 There is an option to rent a mule for your bag, which some people did as they were carrying a lot of supplies. Some people even rode the mule up the 1000m elevation gain! Kristy overheard a woman get off a mule and complaining about her legs hurting, to which Kristy commented, “Oh really, complain to the people that just hiked up 1000m elevation gain”. It wasn’t the hardest hike, just tiring! I did the Grand Canyon with my family in 2012 and that was longer and higher up!

What we didn’t realize on our way up on the hike was that we had a full day ahead of us of sightseeing before returning to Arequipa. We stopped in several places, including some hot springs and a spot where I could feed an alpaca! 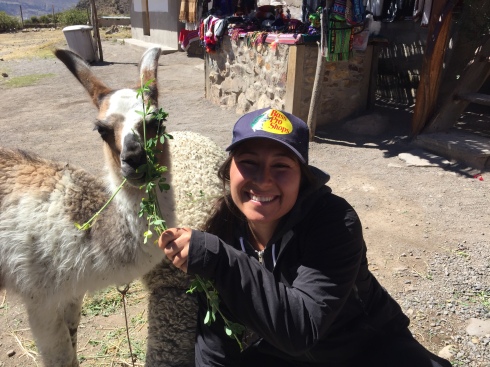 We also stopped at some hot springs which were alright, but it was so hot out that we weren’t appreciative of the warm temperatures. Finally we stopped at a national reserve where there were alpacas and llamas everywhere! It was beautiful! 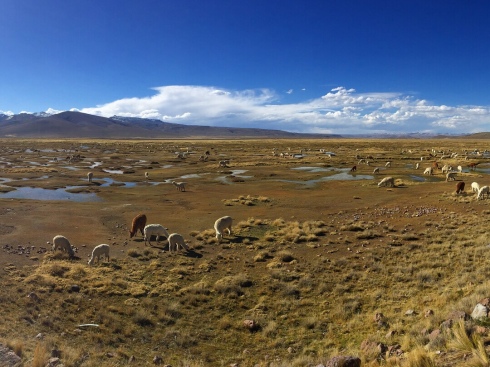 After coming back from Colca Canyon, we went out for dinner with friends from our hike to this amazing restaurant called Zig Zag. It was a bit of a splurge but one of our friends is a complete foodie so we trusted him with the menu and he ordered us plates of food and wine to share! It was unbelievable – the best was this dessert we had – a passion fruit ice cream with a toffee type coating on the top. 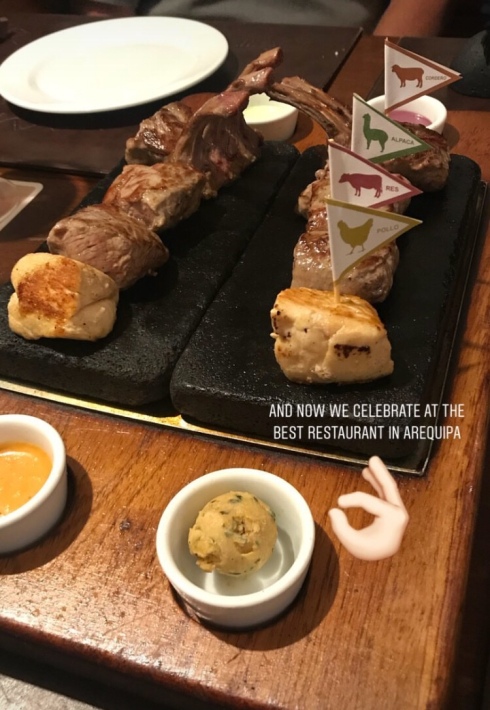 The night ended with a fun evening out! I won’t get into too much detail but it was great because the locals and the tourists go out to dance at the same places! It was an awesome last night in Arequipa and this city will always hold a special place in my heart from the fun, food, fitness and friendship.