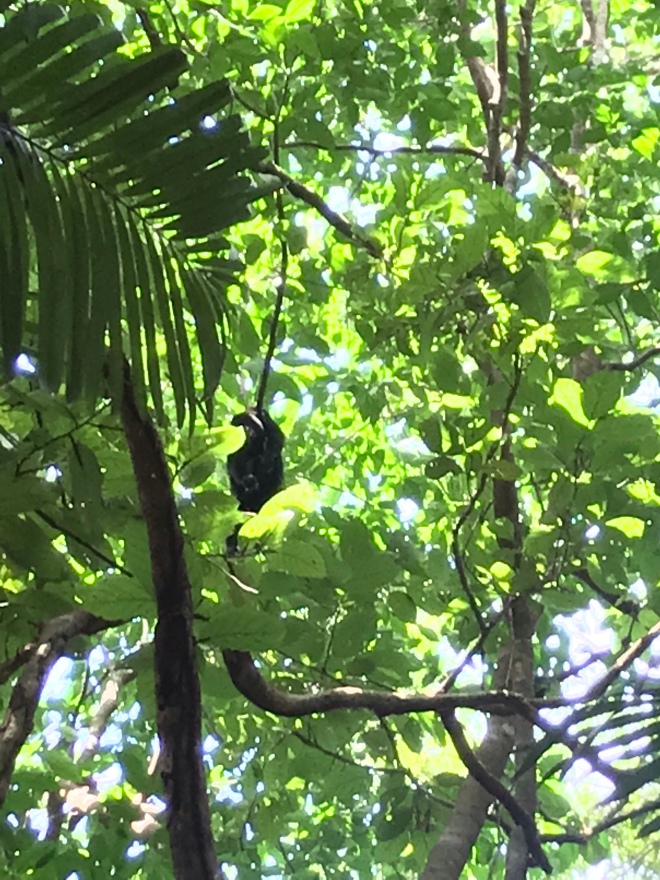 My hostel in Placencia filled up the last two nights that I was there, making for a busier time for the rest of my stay!

On Wednesday night, 6 of us ventured down to a beach bar to watch the Garifuna drummers. This performance was a lot longer and more diverse than the drummers I saw on Caye Caulker, and was put on by a larger group of people from a community a few kilometres down the road. The performance was two hours total and had a lot of singing, different dances, drumming, and one of the performers played a conch shell like a horn. Each song was 25 minutes long, too! It definitely gave us a taste of local culture. 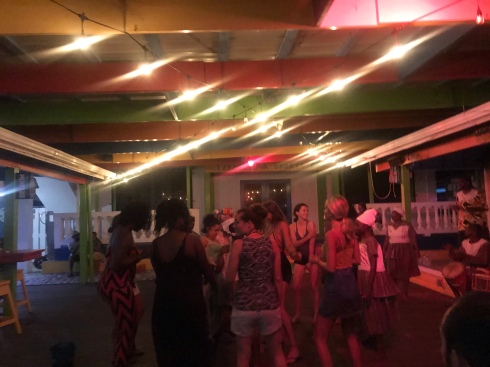 The next morning I had to wake up early to get to a tour office for a tour to Monkey River. We had a really great boat driver named Ian and our tour group was tiny – just me, an American guy I recruited from my hostel, and a family from Chicago. The dad in the family is a teacher so we connected quickly about that, and I enjoyed talking to the two kids about their school experiences. This family is pretty inspirational to me as their completely delightful 15 year old son eloquently explained to me that his dad took the kids on major road trips every summer and they had been to all of the lower 48 states, many parts of Canada and they were beginning to travel internationally as a family, too. I can only dream that I can take on that adventurous lifestyle with a family one day!

Our boat drove us 30km down the river to a small community called Monkey River. We picked up our tour guide there, named Leonardo, then we were off on our way down the Monkey River through the jungle. The water was an opaque green colour and we were surrounded by lush greenery of endless types. On our way to the hiking trailhead, Leonardo pointed out different animals we could see in the water and the jungle from our boat. He also answered our endless questions about seeing jaguars and his childhood memories of catching iguanas after school. We saw several iguanas, a turtle, a tarpon, and some beautiful birds. Apparently crocodiles frequent the water but we weren’t lucky enough to see one that day. 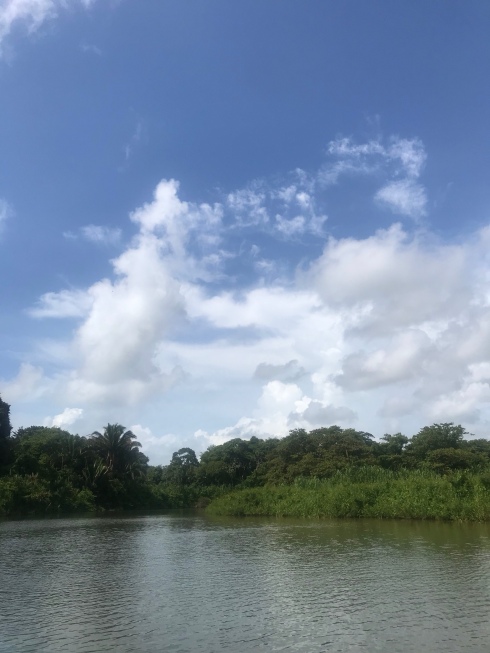 After some cruising we got off the boat to traverse through the forest. The sights, sounds and smells of the jungle were overwhelming and the mosquitoes were EVERYWHERE. While we traversed through the jungle, we listened to Leonardo explain the significance of certain plants and trees while trying not to step on spiky thorns on the ground or get bit by any mosquitos (I failed miserably). After a little while we found a group of howler monkeys (technically they are called a “Troop”) and watched them for a while! Leonardo made some noises to try to get them going so we could hear them roar which was successful – they roared a couple of times! 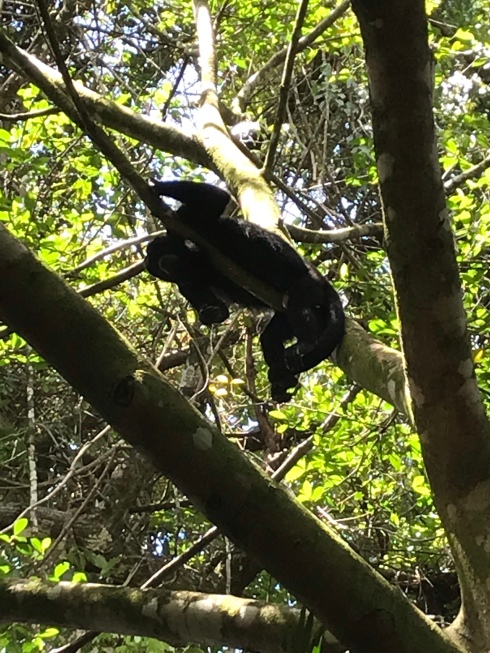 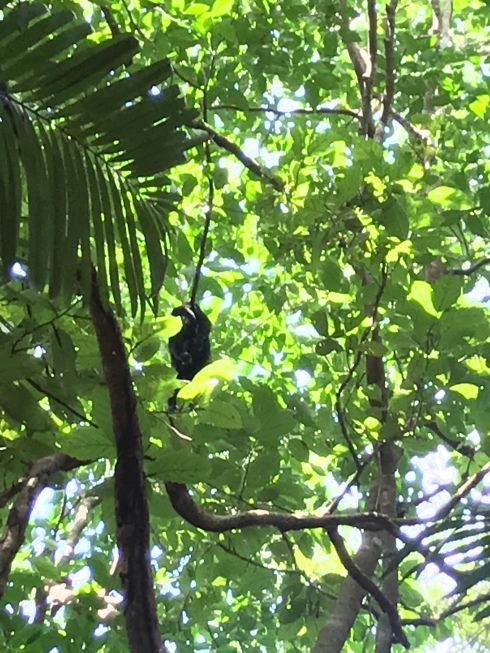 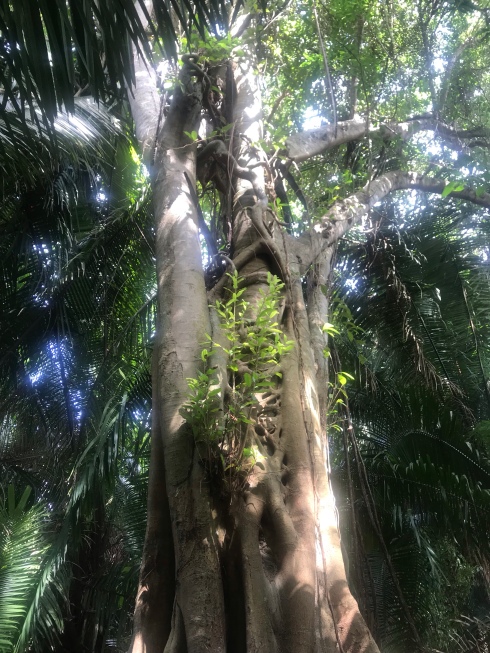 After finishing our hike, we got back on the boat for more animal spotting. We dropped Leonardo back off in the village, then Ian took us to an area near Placencia to spot manatees. It was a quiet day for the manatees as well, and we managed to see a few of them breathing, but it was nothing like the manatee I saw on my snorkelling tour in Caye Caulker. The water was really cloudy which didn’t help our manatee spotting.

We got back to Placencia and I hit the beach but only lasted about an hour as it was 35 degrees outside and I couldn’t stop sweating!! I ended up back at the hostel and spent some time outside enjoying the fresh air with Pandora and Dylan (the hostel owner and her friend) and others from the hostel. Thursday night after dinner, two English guys from my hostel and I headed to the beach bar. I was happy to have connected with these two friends as I enjoyed hearing about their 7-month (so far) world trip, comparing notes about places where we’d mutually been and was able to give them some pointers about Peru, where they are heading next month. We also discovered that our timelines will most likely overlap in Guatemala so we made plans to meet up in Antigua in a couple of weeks!

It was karaoke night at the bar and the biggest week night in Placencia for the off season as it seemed that every local and tourist around was at this bar to watch or participate in karaoke. One of the things that I’ve been really enjoying in Belize is, similarly to Peru, the hostels and tourists enjoy going to the same bars! It adds to the experience of the night life and often leads to some interesting conversations with locals. Around 10pm the thunder and lightning started, then it poured for hours!! The whole bar collaborated to move all the patio seating inside and when we eventually left the bar it was a very rainy walk home!

I woke up at 5am yesterday to catch my 615am bus towards San Ignacio. The earliest bus of the day was the only direct bus to Belmopan, Belize’s capital, so I opted for that instead of having to transfer buses twice. This bus journey was nowhere near as treacherous as my jaunt to Placencia which was a massive sigh of relief. It was quite a bit cooler yesterday morning to the point where I actually felt cold(!!!!) while the bus was ripping down the highway. I actually slept most of the 3 hour journey and hopped on my connecting bus in Belmopan with no wait. I arrived in San Ignacio at 11am which was much earlier than expected!

I spent the rest of the afternoon relaxing before I wandered into the town to check things out. San Ignacio is unique to Belize due to its location close to the border of Guatemala, and their diverse population is representative of that. I ended up at a bakery where I started chatting to these American brothers who are both also teachers! The world of teaching is a global community and it has only helped me make more friends and connections than ever. We compared notes about teaching and they gave me some recommendations for places to go in Guatemala while I gave them the low down about Caye Caulker. It turns out that solo travelling in Belize is an open invitation for any other traveller to start a conversation, which has been nice for keeping me company!

After the bakery I walked about a mile up the hill from the city to visit the Cahal Pech ruins. These are the first ruins I’ve seen so far on this trip and they were really impressive. I was the only person there when I looked around and I was able to climb the steps, walk through the different structures, and take it all in. The walk there and back were excruciating in the 30 degree heat but I’ve just come to terms with perpetually being sweaty and looking like a drowned rat because everyone else does too. 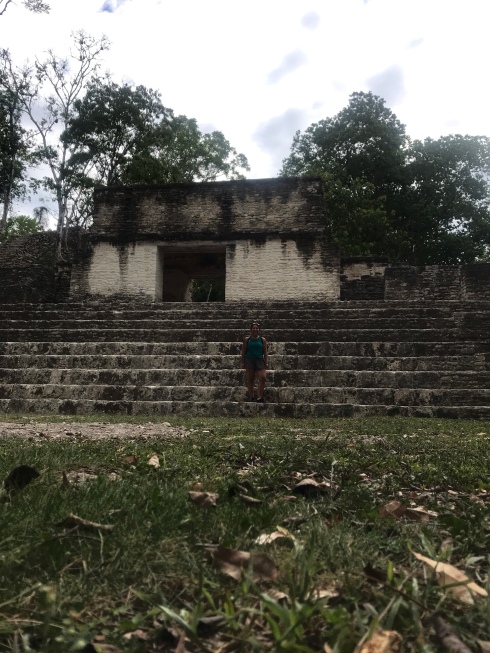 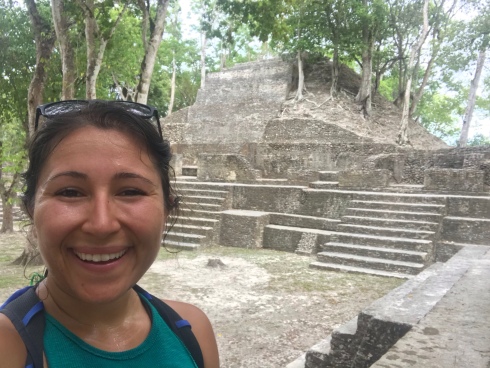 Yesterday night was also a quiet night in my new hostel. There were just three of us staying there last night so we all went to the bar under our hostel with Aldi, one of the two brothers who helps run the hostel, and enjoyed some music and homemade fruit wine from the very artsy bar. It is very unique and is only open Friday’s and Wednesday’s with some very intriguing art covering the walls. The owner brews his own fruit wine so we gave that a try while talking to some of the locals out for Friday drinks. It was open mic night so the locals took turns playing music on the piano and guitar. It was fun to chat with the bar owner, an expat originally from LA but living in Belize for 20 years, a local barber, and a dive master based in San Pedro.

I’m now rounding off my last two days in Belize before crossing to Guatemala on Monday! I’m excited for what I’ll see and do in the next two days and even more excited to move onward to a totally different country and culture, and hopefully some cooler temperatures!