It’s been an interesting couple of days here in San Ignacio!

I had a pretty relaxed day yesterday, first exploring the San Ignacio Saturday market. It was extremely lively and diverse, with merchants from all backgrounds and walks of life. I strolled around for a while and got a delicious breakfast that included the local Belize specialty, fry jacks. It was delicious and full on breakfast cost me only 3.50 usd.

After the market, I attempted to go to the iguana sanctuary which I had heard good things about from my friends from the bakery. I was disappointed to find that the tours all day were cancelled because the guide was sick, so I regrouped and decide to visit another hotel to try the Marie Sharp hot sauce tour.

This tour was phenomenal. In true low season fashion the place was deserted, so I quickly became acquainted with the tasting room master and got to work. I learned about the history of Marie Sharp’s hot sauces and other products then proceeded to taste test 29(!!!) products!!! My favourite were the fruit inspired hot sauces (specifically the mango and grapefruit hot sauces). Martin, the nice man running the tasting room, provided me with crackers and juice to sample the different hot sauces and jams and cleanse my palate in between tastes. It was a flavourful and spicy time and a very unique experience!

After the hot sauce tour, I relaxed at the hostel and started chatting with newcomers. It got significantly busier than the first night so there was more of a buzz of people! For dinner I went and grabbed some amazingly delicious street tacos for a very reasonable $1 bze a taco and brought them back to then hostel to socialize.

This morning I woke up bright and early so I could be picked up for my tour of the ATM caves (ATM is short for Actun Tunichil Muknal). We picked up other groups then headed to the starting point to access the caves, which was about 40 minutes outside San Ignacio, much of which an extremely bumpy road. We were assigned into groups of 8 and then hiked for about 30 minutes (crossing a deep river and 2 shallow rivers) to get to the cave entrance, then we descended into these amazing water caves. Because of the Mayan artifacts preserved in the cave, no one is allowed to bring a bag into the cave or a camera because apparently a tourist in 2014 dropped one on an ancient skull and broke it, so the pictures below are ones I found on google that I’ve put on here for a visual.

The caves were spectacular. The stalagmites and stalactites were stunning and even sparkled when our head lamps shone on them. Our guide was very knowledgeable and explained tons about the geology of the cave as well as the remaining artifacts and skeletons found in the cave. There was some technical climbing involved and a few cramped spaces but overall the caves were quite easy to navigate. The people in my group were super nice and we exchanged travel tips about our future directions. 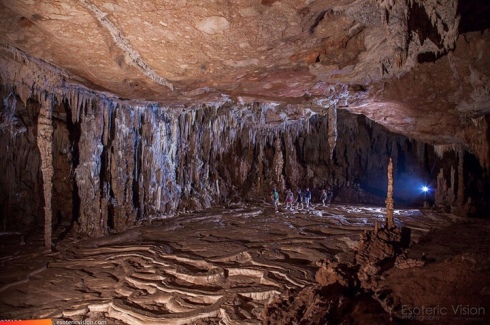 What I found particularly interesting about the caves were the size of them! We hiked about 1km into the caves but the entire network went on for about 5km, much of which isn’t open to the public. The guide that drove us back explained that he had a background in archaeology so he had actually spent a lot of time exploring every corner of the cave network during research expeditions. He said they would sometimes spend up to 10 days in the cave network!

After arriving back at the hostel I tried to see the iguana sanctuary again. It apparently wasn’t meant to be for me this trip because I rushed to make the last tour of the day and it was closed, again due to a sick guide!

Tonight I’m packing up and most likely grabbing some more tacos for dinner. A friend from my hostel and I discovered we have the same plan for heading into Guatemala, so her and I agreed to find our way to Flores tomorrow together.

One thought on “Markets, hot sauce and caving in San Ignacio”