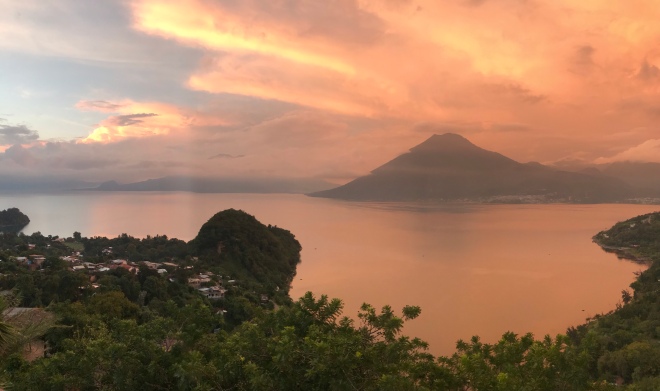 After the fun we had in El Peradon, our little travel group got back on the road to head to the villages surrounding Lake Atitlan. It was a long, windy road that brought us to the village of Panajachel, where we hopped on the ferry to make it to our first location, Santa Cruz. 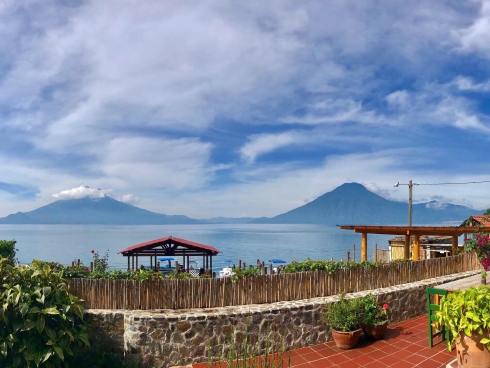 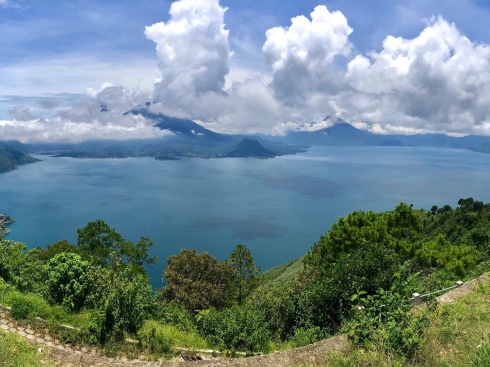 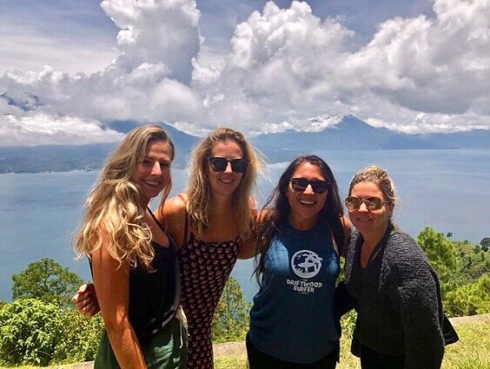 Santa Cruz is a quiet village located on the top of a hill, with two hostels located near the docks by the lake. We stayed at the more calm, chill hostel, as we were in much need of some down time. The day we arrived at the lake was quite rainy so we spent the day relaxing, eating lunch at a co-op style restaurant that doubles as a culinary school, and going to bed early, which was exactly what we needed.

On Wednesday Alex and I took the boat to some of the other communities around Lake Atitlan. The setup of the area is interesting as it is doable to hike or walk between the communities though not encouraged for tourists because people are sometimes robbed. Instead of hiking you can catch a boat from the dock of the community to other spots on the lake. First we docked in San Juan, a quiet town with a small high street. We spent the afternoon shopping and enjoying a coffee in one of the several cafes on the Main Street of San Juan. I was so happy to see an apothecary style store in town where I could buy a natural remedy for the (literal) hundreds of sandfly bites on my legs I acquired on the beach in El Paredon. 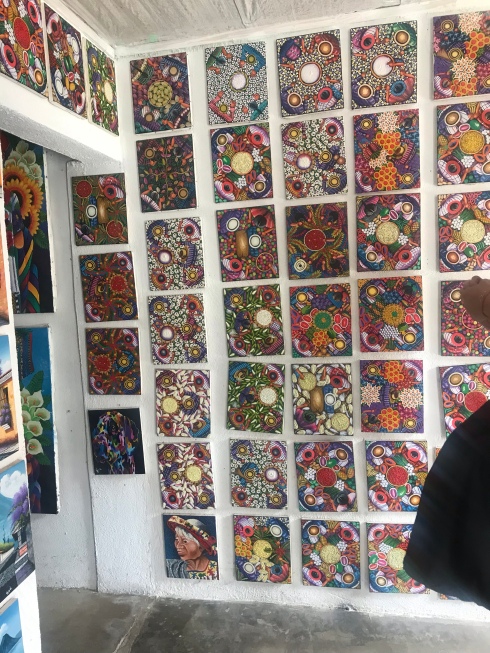 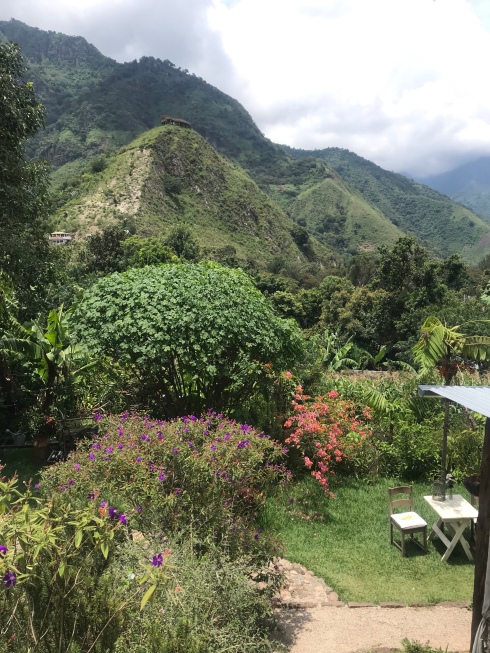 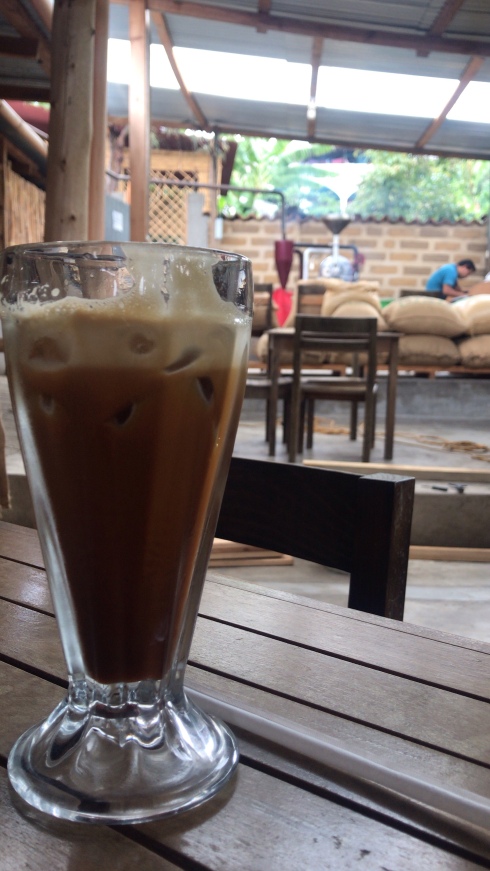 After enjoying San Juan, Alex and I caught a tuk tuk to the next, larger, village over, San Pedro. We explored the church in the community but didn’t stay long as we both felt that we enjoyed San Juan much better. We made our way back to the hostel in Santa Cruz to meet up with Carlie, then met the rest of our travel crew at the other hostel in town for the evening.

The next day Alex and I rose bright and early and took the boat back to the main town on the lake, Panajachel, to catch a shuttle to the small city of Chichicastenango, known for its large market that takes place on Thursday’s and Sundays. It was a very long and windy road to the city and we were very relieved when we arrived and stopped driving. Guatemala has definitely been a country of windy roads!

We spent the morning enjoying a leisurely breakfast on a patio one story above the city, then explored the market. It was a giant market that was quite overwhelming at times due to the large amount of people, very bright patterned clothing and Spanish speaking required by us to fend off vendors or make purchases! The most interesting aspect of this market that I observed was the height of the locals! I was definitely considered tall amongst the locals which is an unusual feeling for me. 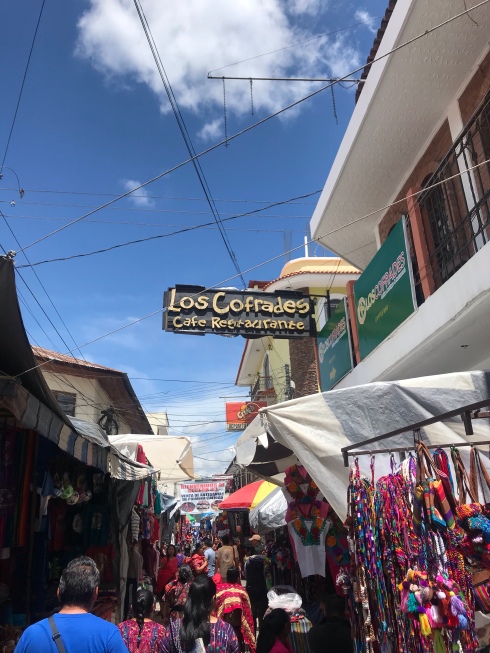 When the shuttle back to Panajachel was finally ready to leave, we were exhausted and ready! We mostly slept on the long and windy bus ride back, then waited it out on the boat to our next destination, San Marcos. San Marcos is a very cool hippie town, with vegan restaurants everywhere. Carlie and Alex had booked an amazing accommodation at the Eagle’s Nest, which is a yoga retreat and hostel at the top of the hill in San Marcos. The views were amazing! 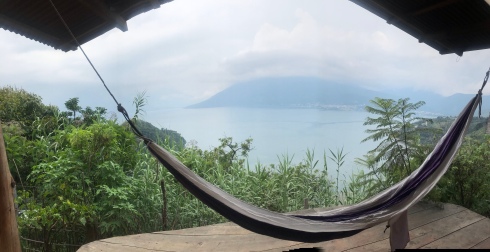 Alex and I were contemplating doing the Indian Nose hike, but after some consideration, and seeing the amazing views from literally our beds, we decided to just wake up for the sunrise this morning instead. We went for a nice dinner down in San Marcos (which ended up being quite a hike down), then retired to bed for our sunrise wake up!

We woke up around 5 am and went up to the yoga platform to watch the sun rise. It was so beautiful and it was nice to be able to wake up for it then crawl back into bed, instead of having to go to a lot of trouble for the same view! 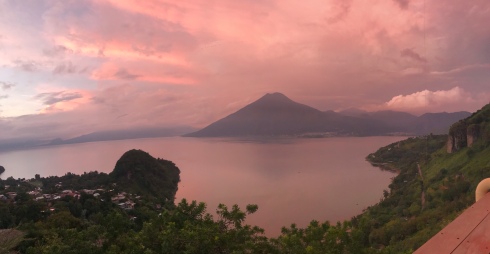 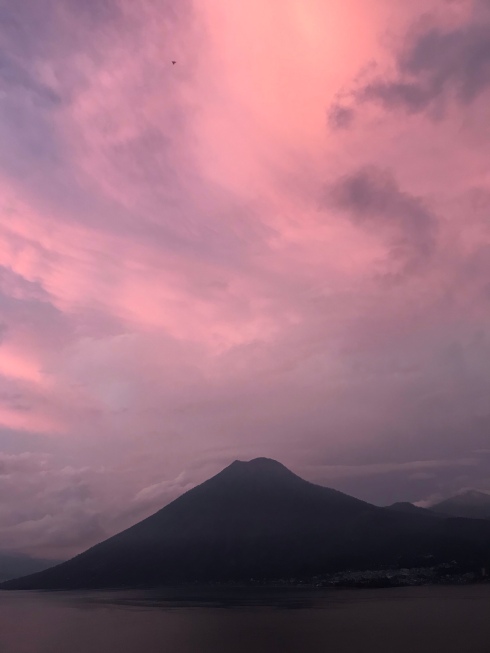 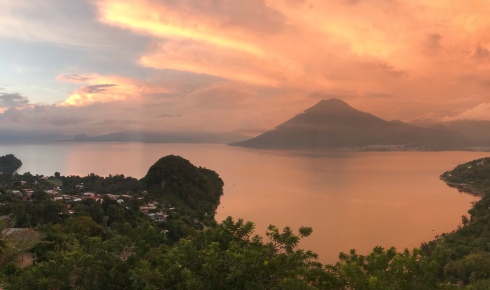 This morning I took the boat back to Panajachel, then hopped on a shuttle to Antigua. I’ll be here for my last three nights before heading home Monday – with an overnight volcano hike tomorrow night! I’m looking forward to it, though I can’t believe that is adventure is close to coming to an end. I’ve already started thinking about my next adventure…..