I can’t believe I’m writing this, but I have arrived home from my trip. It was a whirlwind of a last few days in Antigua as I hung out with friends I made across the country, climbed a volcano, and said some pretty sad goodbyes.

I arrive in Antigua on Friday afternoon and had what Alex would call an “admin hour”, or in my case, a few hours, which I spent trying to figure out how to organize my last few days in the Antigua area. Two friends I met in Placencia, Tom and Jamie, hadn’t crossed paths since we first met a few weeks ago, but we were able to figure out that we would be in Antigua at the same time, so we decided to climb the Acatenango Volcano together. We found a company, booked and prepared for the early(ish) morning the next day.

Friday night, I had plans to meet up one final time with the second half of our El Peradon friend group, Klaudia and Ben, who we had last seen at the lake. They were staying at a different hostel, so I ended up bringing Tom and Jamie and another guy from our hostel over for a “family dinner” and some socializing. This “family dinner” concept was quite popular in hostels in Guatemala, where you pay a sum and then eat with everyone else in your hostel at a certain time in the evening. It is great for meeting people at the hostel and saving time and stress trying to find somewhere to eat every night.

That Friday at the hostel ended up being a reunion of sorts, as almost all the people I have met on our trip so far ended up in the same place. From friends I had met in Flores, to bus buddies on the way to Semuc Champey, to hostel staff who we met when they were having a beach weekend in El Peradon, everyone was around and it was a very fun night. I ended my night on the earlier side as I knew I had a demanding hike the next day. I was sad to leave early but the struggle up the mountain the next day proved that I had made a good choice.

The next morning, Tom, Jamie and I ventured out to our hiking guide office and got prepped for our hike. There were 3 other people in our group, plus a guide, which ended up being the perfect size to conquer the Acatenango volcano. We started hiking at 10am and the hike took us a total of about 5 hours with breaks. The first hour was extremely steep and the group was volcanic ash, and in my opinion, the worst part of the hike as it was also very hot. Tom, Jamie and I rounded up the back as the three other people in our group were very tall and we think that really helped them with their hiking. The second hour and a bit of our hike was still steep, but more solid ground and winded through the trees a bit more. The final hour and a bit of our hike to base camp was the easiest as it was mostly flat along a ridge. As we increased altitude, you could definitely notice a slight shortness of breath, but to be honest was completely fine compared to the altitude I experienced in Peru. We increased in about 1400m in elevation in this time! 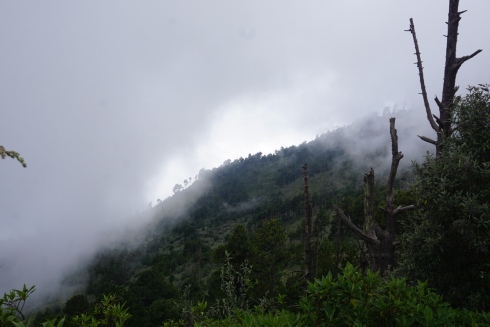 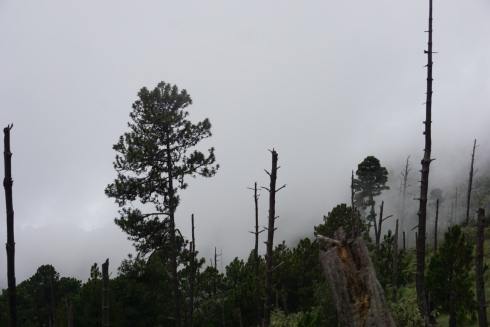 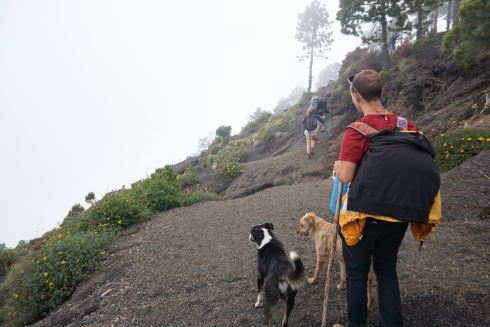 We arrived at the base camp around 2:30pm and spent the rest of the day hanging out around the campfire. Two guys in our group went with the guide to hike closer to the active volcano, Volcano Fuego, but the guide told us the conditions were not good, and that we wouldn’t see anything,  plus it cost extra, so the rest of us decided to stay back. There was actually a beautiful view of Volcano Fuego from our campsite that we got to see a few times before the sky clouded over and blocked our visibility. We had a nice warm dinner and hit the hay pretty early, around 8pm, as we needed to wake up at 3:45 the next day to summit by sunrise. We slept in wooden huts that were very comfortable and warm, which was a nice bonus as it was literally freezing temperatures outside.

When we woke up at 3:45, the sky had cleared up and not only did we get an amazing view of the stars, we also could witness some red hot lava coming out of Fuego in the distance! We got ready quickly and began the hour ascent up to the summit of Acatenango. Besides the first 20 minutes, which was discouraging and challenging due to the volcanic sand on the ground that felt that we were swimming in, the hike was totally fine and just became more and more beautiful as we climbed up the mountain. The views at the top were spectacular and we even got to witness more lava and explosions from Fuego, this time from an absolutely amazing viewpoint. 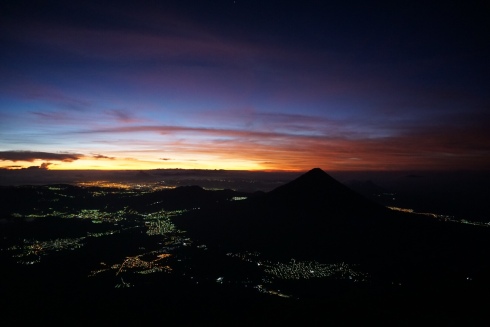 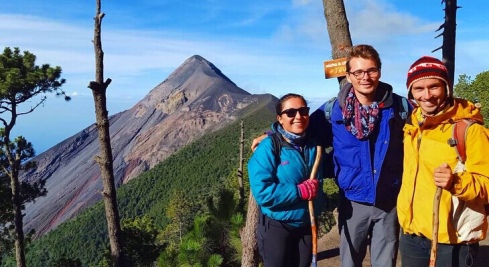 Climbing down the mountain was definitely easier than climbing up! We slid down the volcanic ash (literally slid, it felt like skiing in our shoes) to base camp where we had breakfast and packed up our belongings. From there, we made in down the mountain in just under 2 hours, mostly by running down the steep inclines to save our legs. The time differential between ascent and descent pays testament to exactly how steep this hike was going up!

We arrived back in Antigua and I spent the afternoon getting organized for my very early departure the next morning. I met up with Alex for a coffee to debrief our time apart, then we spent the rest of the evening hanging out at the hostel where our friend Erick was working, as he promised to take us salsa dancing after his shift. Our final night of fun was the perfect end to an amazing trip and it was a very sad goodbye.

Like I said at the beginning of this post, I cannot believe that this adventure has already come and gone. I’m already wanting to plan my next adventure and I can’t wait to see where and when it will happen. While I have solo travelled before, I haven’t done so in this size or “travel difficulty” level in terms of figuring out how to get from a to b, language barrier, currency conversions and being a smart and safe traveller. While solo travelling always has its downs, the “ups” and benefits have significantly surpassed any lonely or difficult moments I have had on the road. Ultimately I have come out better for it in many ways, and I leave this summer break to go back to work feeling refreshed, open, content, and full of joy, with fresh perspectives, new friends and memories to last a lifetime.